Cover photo source: @goodblackdude, Twitter By Sarah Ahmed Thousands of people across the United States took to the streets over the weekend to protest the acquittal of 18-year-old reactionary Kyle Rittenhouse, who killed two anti-racist protesters and gravely injured a third protester last summer during protests of the police shooting of Jacob Blake. Over 200 people gathered in Portland on Friday night for a combative … END_OF_DOCUMENT_TOKEN_TO_BE_REPLACED

By David Martinez On Colombia’s traditional ‘Independence Day,’ July 20, revolutionary students and youth led large, combative demonstrations in Medellin and Bogota challenging the idea that the country has real independence while under the thumb of imperialism. In messages painted on walls, speeches, and chants, protesters denounced the country’s ruling class and their servitude to imperialist interests, principally to US imperialism. Among many militant actions, … END_OF_DOCUMENT_TOKEN_TO_BE_REPLACED

Cover Photo: Meko Williams, a mother of a man killed by police, speaks at a Charlotte rally. By Sarah Ahmed Rallies were held in Charlotte and other cities across North Carolina this past Tuesday in protest of the Pasquotank County District Attorney’s (DA) decision last month to not charge the sheriff’s deputies that murdered unarmed Black man Andrew Brown Jr. as he fled police in … END_OF_DOCUMENT_TOKEN_TO_BE_REPLACED 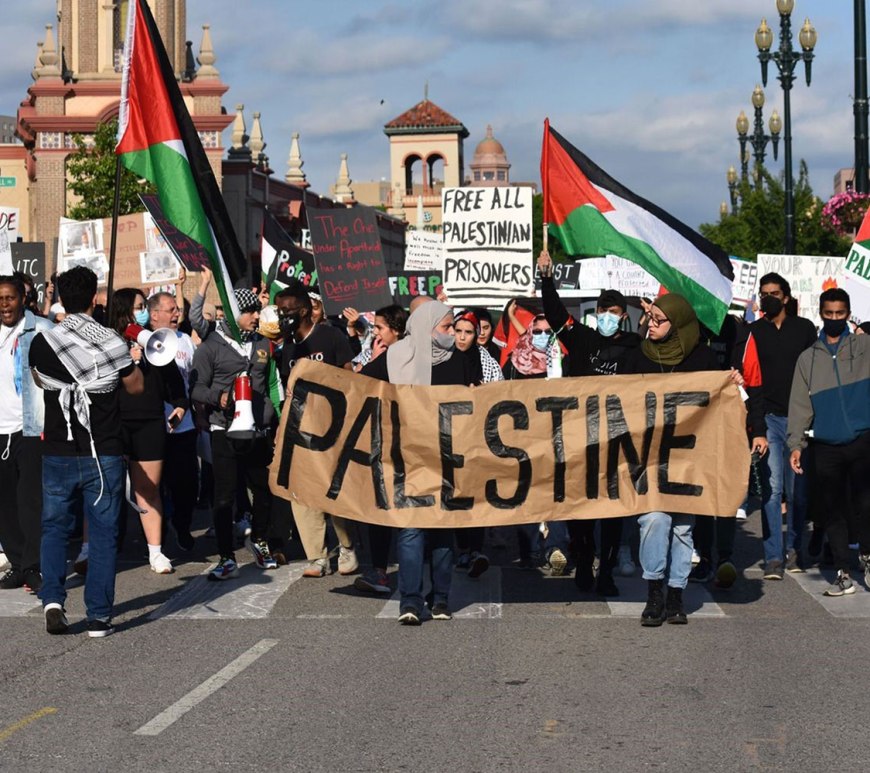 Cover Photo: A Palestine solidarity rally in Kansas City, Missouri (Source: Tribune SC) By Dimitri Sans Hundreds booed US President Joe Biden when he visited Dearborn, Michigan as part of mass worldwide protests this week in solidarity with the Palestinian people and against US imperialism for its role in Israel’s crimes. Thousands more mobilized in US cities to celebrate Palestinian resistance and to condemn the … END_OF_DOCUMENT_TOKEN_TO_BE_REPLACED

Photo credit: Zach Boyden-Holmes/The Register By the Editorial Board When mass uprisings take place it is like a great awakening—many new activists are like a person seeing snow for the first time and expecting it to last for years. To seasoned eyes, it is more like a tide, powerful and inspiring, but already poised to recede. The tide returning to the sea never means that … END_OF_DOCUMENT_TOKEN_TO_BE_REPLACED

By Nélida Tello Police in the city of Panguipulli, Chile murdered Francisco Martinez, 27, on February 5 during an identification check, resulting in mass protests throughout the country. In Panguipulli, demonstrators set fire to 10 government buildings, including the city hall. The capital of Chile, Santiago, saw thousands of protesters take the streets demanding justice for Martinez, and similarly to the protests in Panguipulli, barricades … END_OF_DOCUMENT_TOKEN_TO_BE_REPLACED

The following article is an unofficial translation from A Nova Democracia on the recent peasant uprisings in Peru. By Giovanna Schaidhauer A peasant was murdered in La Libertad on November 3, by the police during a strike against the exploitation and oppression of the latifundium (large landowners), triggering a rebellion in the departments of La Libertad (North of the country) and Ica (South), where the … END_OF_DOCUMENT_TOKEN_TO_BE_REPLACED

By Nélida Tello Over the weekend, thousands of people across Guatemala protested the government’s new $13 billion budget. It is the largest budget in the country’s history, but despite its size the budget slashes health and educational funding. Protesters in Guatemala City, nearly burned the Congress down forcing the President of Congress, Alan Rodriguez, to recall the budget a day after the protest in an … END_OF_DOCUMENT_TOKEN_TO_BE_REPLACED

By Robin Fontaine and Jakob Stein On November 9, the Peruvian congress impeached President Martín Vizcarra for “moral incapacity,” accusing him of receiving more than $600,000 in bribes from a construction project when he was governor of Moquegua. The next day, Manuel Merino, president of Congress, assumed the office before resigning just five days later due to mass protests. In his short term as interim … END_OF_DOCUMENT_TOKEN_TO_BE_REPLACED

Cover photo source Twitter: @instantmyosotis By Sandra Harris Hundreds of thousands of people defied a ban on gatherings across Poland for protests that lasted almost two weeks against a court ruling tightening abortion restrictions. The protests, some of the largest in Poland in decades, forced an indefinite delay on the implementation of a high court ruling that would have eliminated one of the few exceptions … END_OF_DOCUMENT_TOKEN_TO_BE_REPLACED